The Intex Classic Downy Airbed is one of my least expensive camping mattresses that kept me off the ground in every sleeping position (back, stomach, side, etc.). The 2-in-1 valve was also surprisingly user-friendly.

However, I found it super bouncy, and it’s made of PVC.

Would I still recommend this? Read on to find out!

Check out the Intex Airbed:

I bought the Intex Classic Downy Airbed in a Full size from Amazon, and here’s what the outer packaging looked like:

After unboxing the Intex Classic Downy Airbed, I got just the airbed with some instructions and a patch.

Here are my personal measurements and timings of the Intex Classic Downy Airbed (in a Full size):

I put the Intex Classic Downy Airbed through these 5 tests:

Here’s how the Intex Airbed performed.

The Intex Classic Downy Airbed gets me about 8.5 inches off the ground. When inflated fully, my body does not touch the ground whether I’m sleeping on my back, stomach, or side. Even when I was leaning on my elbow or sitting down, I could not feel the ground.

This Intex Airbed measures about 73 by 53 inches when inflated fully, which is slightly smaller than Full size dimensions. For me, it’s okay for 2 people, but it’s not the most spacious for sure. If you need an airbed that’s a bit longer and wider, this Intex Airbed also comes in a Queen size, which is 80 by 60 inches.

The vertical air chambers of the Intex Airbed doesn’t really help with bounciness when I was rolling around in bed, and it was especially bouncy with another person sharing the airbed. This Intex Airbed is actually my bounciest 2-person inflatable mattress.

The flocked top feels velvety and soft, and I found that this also helped to reduce the noise from the mattress when moving around in bed. The vertical baffles are not as uncomfortable as I thought they would be. They’re actually decently comfortable.

The Intex Classic Downy Airbed features this 2-in-1 valve along the side of the airbed, which is flushed with the surface.

For inflation, the instructions say to pull off this valve cap and to use this 1-way valve.

Because my Intex Airbed did not come with a hand pump, I used this standard electric pump that came with a few of my other 2-person camping air mattresses. Using the 1-way valve, it took about 5 and a half minutes to inflate fully.

I found that a quicker way to inflate the Intex Airbed is to unscrew this cap and to use this 2-way opening instead.

It takes about 3 minutes, which is half the time. When you remove the pump though, air will leak out, so you can use the 1-way valve to top off the air after, which will take another 1 minute or so. So, altogether 4 minutes for the full inflation.

If you find the Intex Airbed too firm, you can unscrew the bottom 2-way opening slightly to let a bit of air out. Just don’t unscrew it too much or too much air will leak out.

To deflate the Intex Airbed, unscrew this cap, fold the airbed in thirds, then use your body weight to push the air out. Fold it in thirds again, and this will get most of the air out. This takes about 1 minute. Then, I fold it in half and pack it away, which takes another 30 seconds, so altogether 1 and a half minutes.

After deflating, the Intex Classic Downy Airbed has a packed size of about 20 by 12 by 5 inches. Here’s what it looks like beside a 32-ounce Nalgene bottle.

This Intex Airbed in a Full size weighs about 6.8 pounds. Also, it doesn’t come with any stuff sack or carry bag, and it’s so difficult to get it back into the box, so I don’t bother.

The Intex Classic Downy Airbed is not insulated, with no R-value, so it can only be used in summer. It’s way too heavy for backpacking, so you’re limited to car camping.

Here’s what the Intex Airbed in a Full size looks like inside a Coleman 2-Person Sundome Tent.

There’s a tiny bit of space for gear at the sides, but not very much. Livable space is decent, and there’s enough space for me to sit up and also to crouch. It was a pain to inflate though, because I had to squeeze out from the corner of the tent after inflating.

If you buy the bigger queen-sized Intex Airbed, I think it’s gonna be super difficult to inflate it inside the tent, because a queen-sized airbed takes up the entire Coleman 2-Person Sundome Tent.

And here’s what the Intex Airbed looks inside a Coleman 4-Person Dome Tent.

There isn’t enough space to fit 2 of these airbeds, but having just 1 airbed gives me plenty of space for my camping gear. I also have lots of livable space.

The Intex Classic Downy Airbed is made of vinyl, which is PVC. The top is velvety and soft, while the bottom feels plasticky. The PVC does seem to have a decent thickness, but it does smell when you first start using it. The smell is strongest out of the box, but it does fade after a few days of use. If you have the time, you might want to air it for a few days before using it.

The valve is made of plastic, and seems decently constructed. I could see the Fiber-Tech Dura-Beam construction though the valve.

As for air retention, it’s not the best. After I used the Intex Airbed for 1 night with another person (about 300+ pounds together), the airbed lost about 10-15% of air by the next morning. Subsequent nights were not so bad, losing only 5% more air each night or so.

This air loss is not due to stretching, because I used the Intex Airbed multiple times before conducting this test. It’s also not because of temperature differences, because I conducted this test indoors under regulated temperatures.

I think it’s best to top it off every night before sleeping if you like a firm mattress, but I never had to worry about ending up on the ground.

There’s no warranty on the Intex Airbed, overall quality is not the best, but I thought that it’s pretty good for the price I paid.

For pros, the Intex Classic Downy Airbed is one of my least expensive 2-person camping mattresses, and it’s definitely value for money if you’re on a tight budget.

As for cons, it’s super bouncy, and is actually my most bouncy 2-person camping mattress.

It’s made of PVC, which I don’t really like, because PVC is naturally heavy, doesn’t pack down small, and smells for quite a few days. Air retention is also not the best compared to my other mattresses, but to be fair, I never had to worry about ending up on the ground.

Overall, the Intex Airbed was not particularly outstanding in anything except for the price point, but considering how low the price was, I found it to be decently comfortable and easy enough to use.

Because quality isn’t the best, I don’t expect it to last for many years, but it’s still perfect for someone who doesn’t camp very often, someone who’s on a tight budget, or someone who needs a quick or last minute sleeping solution. I would definitely not recommend this for long-term use, or for frequent camping, and definitely not for people who toss and turn in bed a lot.

If you don’t have a pump, remember to get the option that comes with a pump. Or you can buy one separately.

To find out how the Intex Classic Downy Airbed compares against the competition, here’s a blog post where I bought, tested and compared 10 of the best camping mattresses for couples.

Or, check out the Intex Airbed: 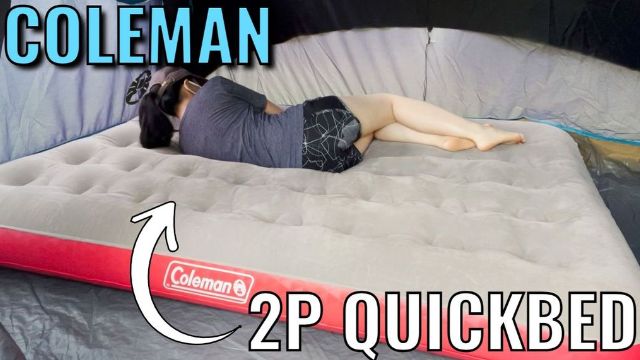 The Coleman Quickbed Air Mattress is a pretty affordable camping air mattress, and it comes in many sizes – twin, full and queen. I bought the Full size for myself. However, I found that it’s not quite so user-friendly, and the comfort levels weren’t up to my expectations either. Why? Read on to find out… 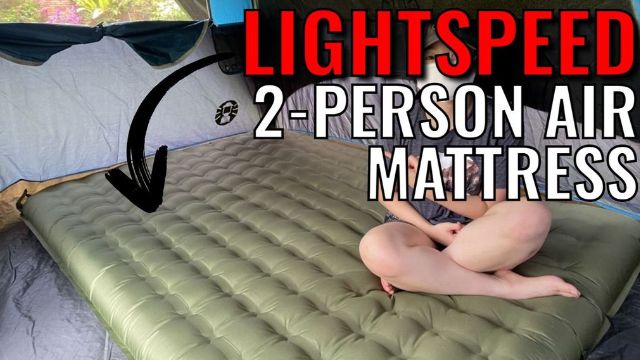 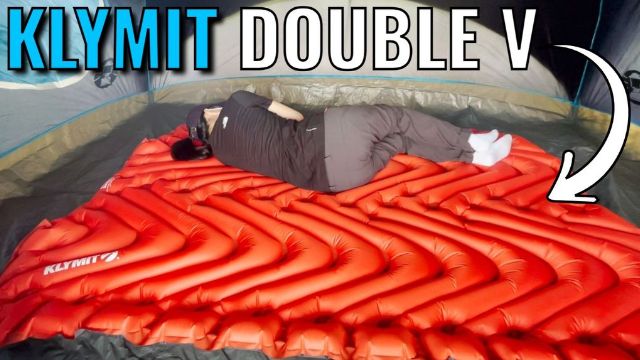 The Klymit Double V Insulated 2-Person Sleeping Pad is high quality, easy to inflate (it can be inflated even without airflow!), very portable and extremely versatile (it can be used not only for camping, but backpacking and traveling as well). Unlike its Uninsulated counterpart, the Red Insulated Klymit Double V can also be used for… 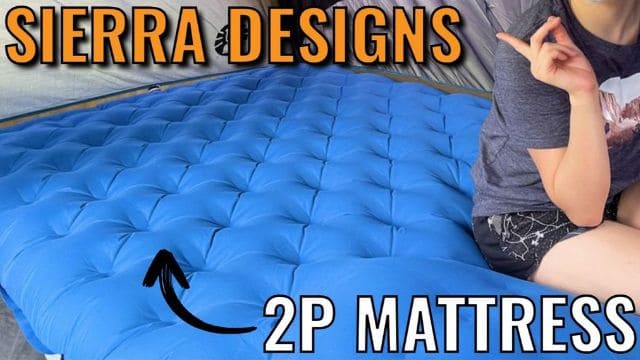 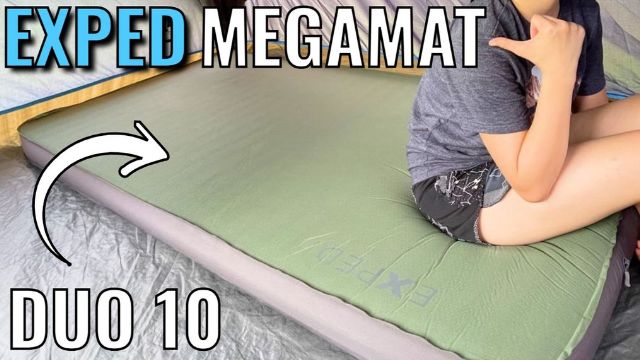 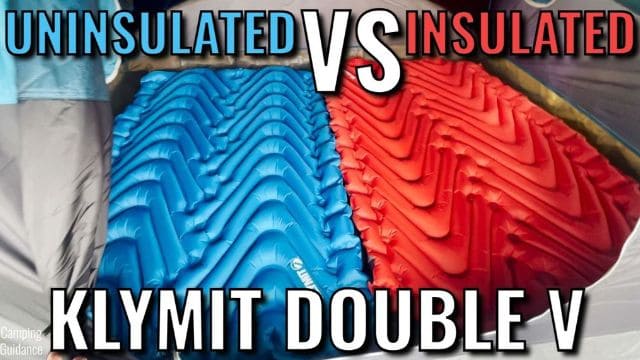